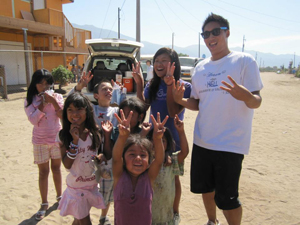 One of the most life-changing, mind-blowing, heart-exploding experiences in your spiritual life is when you encounter God working in other parts of the world, or outside the community you’re familiar with. In Matthew 28, Jesus gave his disciples an important command, and what is now widely known as the Great Commission; he said, “Go and make disciples of all nations, baptizing them in the name of the Father and of the Son and of the Holy Spirit, and teaching them to obey everything I have commanded you” (Matt. 28:19-20). The summer before his senior year of high school, Alden Chu decided to attend a one-week short-term mission trip with members of his church at Livingstone Alliance Church in Hacienda Heights.

Alden was part of a 29-member team made up of students from middle school to working adults. His church joined with other sister churches in an effort called The Ensenada Project, based in Ensenada, Mexico, which is about 200 miles south of Los Angeles. The team partnered and worked alongside pastors and local churches in Ensenada to build homes for church members and coordinate Vacation Bible Schools for local residents.

Alden shares about how he obeyed Jesus’ command to go and saw firsthand how Jesus truly has “all authority in heaven and on earth” (Matthew 28:20).

Before leaving for Mexico, I thought I wasn’t ready. The week before, I was in Oregon and still in vacation-mode. Fresh off a flight from Portland, Oregon, I arrived in L.A. just in time for dinner. The night before departing for Mexico, I was out until midnight with my friend when I should have been packing. I knew I wasn’t ready for this trip and I was anxious about how prepared I was for this mission trip.

The morning arrived and I was exhausted from the night before. On the way to San Diego, the mission trip became a reality. The surroundings became less and less familiar and while we were at the car rental, I started to leave behind the world I knew and had been accustomed to. After lunch, it was only a matter of time before we reached the border between the United States and Mexico. There, I said my last goodbyes to my friends and family with the uncertainty of ever returning back given the dangers there. Just a few seconds after we crossed the border, I could see the difference between the U.S. and Mexico. It was as if we were in downtown L.A. but worse. The only guide I could count on now would be God. There were no authorities to help us like in the U.S. and the military checkpoints with armed soldiers were more frightening than helpful. I could not fathom living here without God’s protection and his grace and mercy.

We safely arrived at the mission center, where we lived for the next week. Over that time, I saw God work in many ways. One of the highlights of my trip was on the first Sunday we were there. Half the group, including me, had the awesome opportunity to join a church service at a local Mexican church. Being an American, I expected something similar to my own church service back in Hacienda Heights, but I was in for a surprise. Their time of worship consisted of blasting their guitars louder than any other worship time I had experienced in my church back at home, and as the worship leaders led, the group of missionaries including myself were lost because they didn’t have lyrics projected on a screen or printed on a piece of paper. The Mexican congregation sang alongside from the bottom of their hearts. I looked at all of them and they had their eyes closed and one of their hands in the air or clapped with the beat. Of the songs played, I recognized “Here I Am to Worship,” and it touched my heart that the same songs we worship with in the U.S. are universal. During that church service, it didn’t matter that we were Chinese and they were Mexican. With the help of our translator, the language barrier did not prevent either side from hearing Pastor Wayne, our Chinese pastor, speak.

The most memorable highlight I had on this trip was a home visitation at one of the church member’s home. A group of us, which included Daniel, Ryan, Garrick, our intern Rachel, Pastor Reynario and I visited the church member. The woman’s name was Adella, and she was troubled by many things. As she gave her testimony, I could not help but feel the pain that she had gone through and when she first shed tears, I did the same. She explained how she was always worried about her husband who would be gone days at a time because of work. They do not see each other often and she would lose faith in him because he wasn’t close to God. After she was done talking, I shared my testimony with her. This was a time I felt my testimony was told at its best. Somehow, I said all the right things and it touched Adella’s heart. When I was done, Pastor Reynario explained how before, my heart was not clean, but after receiving God into my heart, he cleansed me from the inside out.

All in all, God taught me some important lessons during my time in Mexico. He taught me how to appreciate the little things in life and to be thankful for what he has given me and to use everything he’s given me to further his kingdom. God’s love extends further than we, as humans, can even imagine. He brings the darkest places into light through his glory and he will have us make disciples in all nations.

Alden Chu, 17, is a senior at Glen A. Wilson High School in Hacienda Heights. He enjoys playing video games, sports, playing piano, hanging out with friends and spending time with his family playing Wii games.

For more information on short-term mission trips and how you or your church can participate in God’s work throughout the nations, visitÂ The Christian & Missionary Alliance website.

Joanna Wu
Joanna Wu serves as the editor-in-chief of RE:NEW Magazine and Presence Possibilities. She received a M.A. in Biblical & Theological Studies from Talbot School of Theology at Biola University. She previously worked for a public relations firm and has a background in journalism and American studies.

Joanna Wu serves as the editor-in-chief of RE:NEW Magazine and Presence Possibilities. She received a M.A. in Biblical & Theological Studies from Talbot School of Theology at Biola University. She previously worked for a public relations firm and has a background in journalism and American studies. View all posts by Joanna Wu

Singing For His Glory